It's the end of the week and we are getting close to a new month so I thought I would talk a little about something I am awful at, Goal setting. I've always felt like setting goals was something I struggled with. I would definitely say that my awful goal setting was most evident any time I tried to change my health and fitness routine. I am an all or nothing type of person so when I wanted to set a new goal it would always be so extreme. Cut out sugar completely (if you know me, you know that's a hilarious thought), go to the gym 6 days a week for an hour or more, do yoga 7 times a week... I'm sure you get the picture. 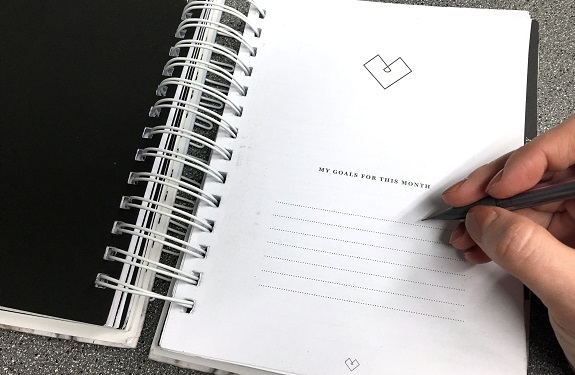 This past January, in lieu of New Years Resolutions, I decided to set smaller goals each month. I know that goal setting as a concept has "rules" that come with it. You want your goals to be 'smart' - specific, measurable, attainable, realistic and timely etc, etc, etc. I decided that I needed to remember who I was setting these goals for (me - a very tired and easily overwhelmed woman) and remember why I was never meeting my previous goals (I'm crazy and would try to pile on too much too soon). Maybe I should scratch the word Goal all together. Perhaps I am setting monthly intentions?

I decided my intentions for January would be vague because I already knew how horribly the alternative always ended up.

My "goals" for January were

- Move my body more.
- Cook one new recipe a week.
- Feed my body good whole foods.
- When I'm feeling overwhelmed, focus on the positives.
- List 3 positives daily (keep in mind this was during my first trimester where I was feeling awful and my mind was bogged down by some pretty negative thoughts).
- Organize my space.
- Allow myself to make mistakes.

I guess some of these goals or intentions were specific and/or measurable but most of them were just things I wanted to start doing.

The outcome from January? I accomplished all of them. I moved my body more than I did in December, I tried new recipes even if they were extremely simple, and I fed my body more whole foods that would nourish me but at the same time wouldn't punish myself when I was craving oreos haha.

For February I planned on continuing my intentions from January but set some new ones to focus on.

- Get out of my comfort zone and do one thing a week I think I am bad at.
- Drink 2L of water a day.
- Have a consistent evening routine (falling asleep on the couch at 7pm and then moving to my bed at midnight was becoming an issue haha).
- Work off of a to-do list.

I can happily say that these were all things I was able to accomplish.

I know that I'm not saying anything new or that hasn't been said before. Goal setting is something that some people love and excel at so I'm sure those people are rolling their eyes at this entire post haha. I am someone who struggles with knowing how to set limits when goal setting and who needed to find a new approach. I'm also something who beats myself up when I don't accomplish my goals and I was tired of setting myself up for failure.

I just wanted to share this in case you're like me and you tend to go a little overboard when setting goals. I'm really finding that setting these monthly intentions has helped me stay focused on the positive changes I want to make without the stress or guilt that was attached to my goals I wasn't able to meet.

Let me know in the comments if you have any suggestions for setting intentions or goals that has helped you out.
Posted by Melissa at 3/18/2016