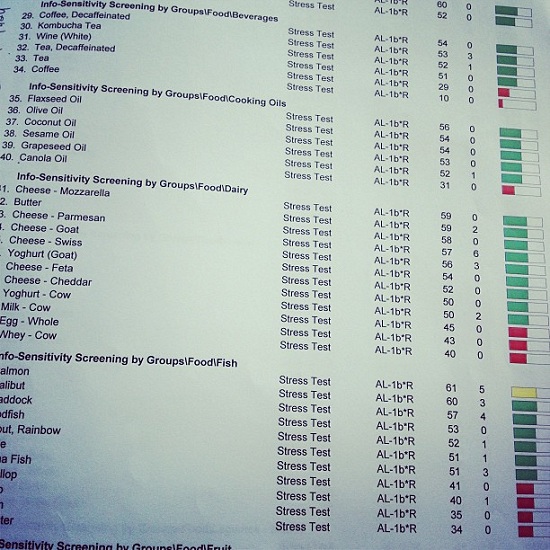 After months and months (and months) of feeling tired, stressed and uncomfortable in my own skin, I decided it was time I saw a nutritionist. I know I have a sensitive stomach but I wasn't sure what it was sensitive to so I was kind of playing a guessing game. I was also really unsure which multivitamins I should take and any attempts at taking them just caused that sensitive stomach of mine to rebel against me. I sat down with Jen of My Edible Advice for a sensitivity testing and some of the results were expected and others were really surprising. I was going to attempt to describe the testing process but I realized it explains it on her website so head on over there to see what it's all about.

A quick description would be that I was tested to find out which foods weakened my body (imagine them going through me like sludge... attractive visual, right?), which were balanced and which stressed my body out. I have two food allergies and those both tested as 'weak' as well. Coffee scored really low but decaf was fine, which meant the problem isn't coffee, it's caffeine. Milk scored low but yogurt and other sources of dairy were fine. Wheat scored very low but other sources of gluten were okay so I don't have to avoid gluten, just wheat. What I really liked was how specific the results were. I had noticed that bread and I didn't always get along and milk wasn't my stomach's best friend but instead of having to try a gluten free diet or assume that I'm lactose intolerant I can hopefully build a diet and just avoid the specific foods that weaken me. I also learned which vitamins and minerals I was low in so I am finally taking the correct multivitamins. I can sense your excitement.

This is not a sponsored post and I was not asked to write about this. I have just been feeling really down lately and I felt so empowered after this sensitivity testing that I wanted to share it with all of you. I'm not saying it's for everyone, but I was really happy with my experience.