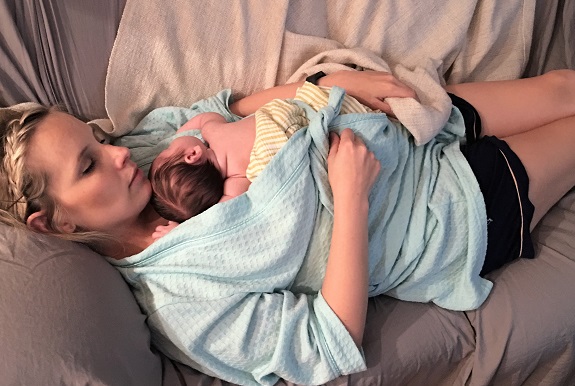 Before I was pregnant, if you had asked me how I was doing, I would almost always reply with "good! Tired, but good!". Sometimes it would be accompanied by a chuckle and "but aren't we all?" It was just something I always said because it was how I felt… I was tired. Often, exhausted. I had been tested for every potential vitamin deficiency but that hadn't given me any answers. I decided that I was just a terrible sleeper and I was probably destined to just be tired forever.

During my pregnancy I was extremely nauseous for the first 24 weeks. It was like a 24 hour hangover without the sweet sweet relief of actually throwing up. I eventually went on diclectin which helped the nausea but came with a side effect of making me even more tired. So of course, when people asked me how I was doing I would tell them I was tired. One day, after saying the word "tired" for the billionth time I realized I didn't want to be known as this tired person. Even if I was tired I would rather people focus on other things about me. I didn't want to be seen as the tired pregnant woman. I wanted to be known as the happy or excited pregnant woman, because I was those things as well.

So I decided I would no longer say the words "I'm tired" out loud no matter how I was feeling. Slowly but surely I started to notice something… I wasn't as tired. It was probably a coincidence though, right? Once the baby came I would obviously be exhausted again.

Then Thomas arrived. My adorable little nugget of joy. Let me take a quick moment to explain Thomas' sleep habits. When I brought him home from the hospital he started cluster feeding immediately. That meant he fed every 30 minutes for days. He also would only sleep on me (I would literally tie him to me so I could get some shut eye without him rolling off - see the photo above). I'll summarize the following 9 months by saying that he wanted to feed every 2 hours… every night… until about a week ago. Now we get a few three hour stretches in as well haha. I like to think of my sleeping as a lot of naps, and who doesn't love a nap?

I'll leave the topic of his sleep at that for now but my point is that I haven't really had a solid nights sleep since Thomas was born. The crazy thing? I'm still not as tired as I was before I decided to stop saying "I'm tired". I had stopped saying it because of how I thought other people were perceiving me but I had no idea it would actually change how tired I felt. That realization has made me such a huge believer in the power of words and their effect on how we feel.

To be fair, I'd been told the importance of the spoken word before but putting it into practice and actually believing in it has honestly changed my life. I've always considered myself a pretty positive person but I found as I got older the self talk in my mind started turning more and more negative. I found myself complaining instead of finding solutions. I was really hard on myself over the silliest things. I wasn't unhappy by any means but I really wasn't focusing on the positives. Since I stopped allowing myself to say this one phrase there has been a shift in my entire mindset.

This isn't to say that I never talk about what's bothering me because I'm a huge believer in working through problems. Sometimes life is just hard and it's really important to acknowledge that and work through it. I just try (keyword is try) to make sure that my words have a purpose and that they will hopefully result in a solution. There are still areas of my life where I know I need to be kinder to myself and focus more on the positives. There are still times I start venting and realize I just sound really negative. I'm working on it though, slowly but surely.

I also know that there are a handful of other words I still need to eliminate from my vocabulary and phrases that serve no purpose. Like, do I really need to say "baby weight" ever again? I vote No.
Posted by Melissa at 5/15/2017