The Hospital Bag: The Favourites & The Forgotten 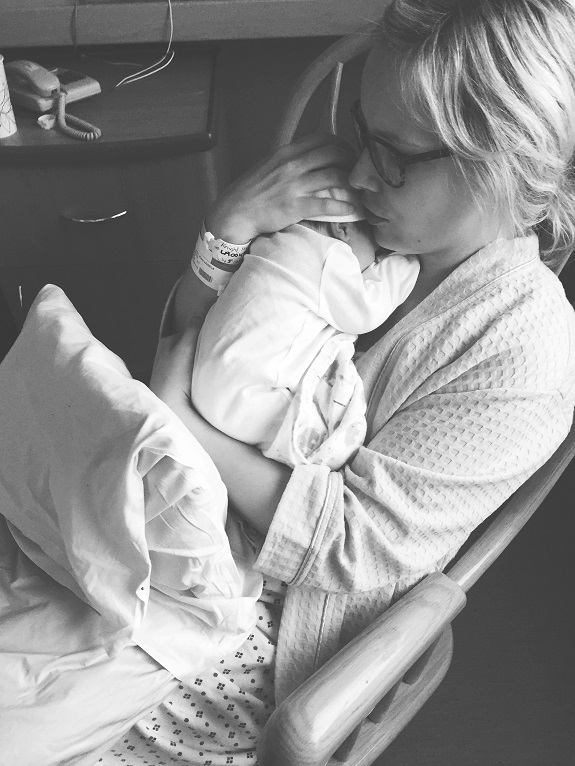 When Thomas arrived 3 weeks early I didn't have my hospital bag ready to go. I know, I know... most of you probably had (or have) your bag ready months early but in all fairness I had planned 3 weeks of holiday time after my last day of work to get organized. Thomas had a different plan and arrived a few days after my last day.

I went into labour on Sunday, July 3rd at 3pm when, after coming home from a walk, I started feeling some cramping. I thought that the cramps were from the baby dropping because as soon as they started they were coming every minute and lasting 45 seconds. I wasn't an expert on going into labour but contractions weren't supposed to start coming at a minute apart from the beginning, right?  By 11pm that night the pain was worse and the cramps were still coming a minute apart so I wasn't able to sleep. I hung out on the couch watching Boy Meets World and googling "false labour versus real labour". All signs pointed to real labour other than the contractions being so close together already. Around 3am I dozed off for a minute and my water broke so I thought perhaps I really was in labour. Why wasn't my water breaking more of a sign that I was in labour in my eyes? Mostly because it wasn't as dramatic as the movies had lead me to believe so I honestly though perhaps I had just peed myself a bit while sleeping. There I said it. It hadn't happened yet up until that point but I was 37 weeks pregnant... It was definitely possible. Regardless, that's when I started googling "hospital bag list" and started getting things ready to go.

I didn't have everything I needed so we had to make a stop on the way to the hospital to pick up the last few things. I was still pretty sure that I wasn't in labour and that the hospital would turn me away. We were only headed there for a quick check up to be honest (my doctor was away when I went into labour). Walking through Walmart with contractions every minute was kind of hilarious. When we got to the hospital they checked me out and realized the baby's heart rate was way too high so he was in some sort of distress. They confirmed I was having contractions every minute despite only being dilated 2cm. Once the baby's heart rate had normalized they let me know he had pooped inside of me which can be dangerous for the baby if the water has broken. That's when we were admitted and told we were going to have our baby! He arrived 33 hours after the first contraction but honestly, time flew by. Also, they weren't sure why my contractions came every minute for the entire 33 hours (and for the few hours they did slow down to every 2-3 minutes, they had to speed them up during that time with oxytocin to get that baby out quickly).

Now onto the real purpose for this post, the hospital bag.

I'm not going to tell you what to pack in your bag because everyone has a different birthing experience and there are a ton of useful lists online. I just thought I would tell you the items that I ended up using the most out of my bag, as well as a few things that I wish I would have brought.

The list I used when packing my bag was this one. So my bag resembled that list (although I didn't pack most of the take it or leave it list).


Items I found the most useful

My toiletries: I didn't put on any makeup until we left for the NICU but I was happy to brush my teeth and freshen up a bit for visitors.

The robe: One of the items I picked up on the way was a light robe from Walmart that cost $20. I was happy to be able to wear that when I wasn't in the bed and it made me far more comfortable for visitors. I was ready to ruin it if needed but that didn't happen and I now wear it at home. (It's the one I am wearing in the photo above).

Slipper socks with grip on the bottom: Perfect for walking around the hospital while trying to help the baby lower.

Granola bars: While in labour I was on a liquid diet but right after the baby came the granola bars we had in our bag came in handy. I probably should have eaten one sooner but as soon as we realized how much my body needed food I scarfed a few of those down and they were amazing for helping me get my energy back up quickly.

Comfy underwear: I bought some cheap oversized underwear from Walmart that I was happy ruining. The hospital does provide mesh panties that a lot of people love, but I was happy to go home in the ones I brought (and they were helpful for the days following).

Sanitary pads: These will be provided for you but they are super bulky. I was happy that I brought a few thinner (but still heavy flow) night time pads with me.


Things I wish we had brought with us

A small fan: Oh my gosh was I hot while I was pushing. Kevin was actually holding one of my legs while I pushed but inbetween pushes I had him fanning me using some piece of cardboard that was on the table beside me. I really wish we had some sort of handheld fan that could have helped cool me down.

A change of clothes for Kevin: As mentioned, I don't think either of us were really convinced we would be admitted to the hospital so he didn't bring a change of clothes. It wasn't the end of the world but I'm sure he would have appreciated being able to freshen up for guests. This one is listed on the packing list I used but apparently I just didn't notice it and I really wish I had.

A large bottle of water (or 2 or 3): I kept having to send Kevin to buy small ones and it would have been handy to have large ones available.

Tums: My heartburn didn't stop while I was in labour and I had to ask someone to bring me Tums. So if you have bad heartburn during your pregnancy it's just something to keep in mind.

Luckily there are a ton of resources online for soon to be moms so figuring out what to pack is pretty easy. If anything I was over packed. If I were to offer one last piece of advice it would be that when you leave the hospital, take anything they will allow you to. No, I'm not suggesting you steal blankets and a lamp but any diapers, wipes, vaseline, or the peri-bottle that they will let you have, take advantage. Every hospital is different and I'm only speaking from experience at a Canadian hospital, but the nurses were very generous and allowed me to take a few things with me. Good luck and if any momma's out there have any other hospital bag favourites to share, let me know in the comments!
Posted by Melissa at 9/14/2016